This was created for a first grader for Christmas. I hate sewing so this was not my favorite thing I've made. It took me longer to sew the web than it did to make the hat. I actually had to take out the web a few times. I am learning that the tighter you sew things it can actually change the shape of your item. 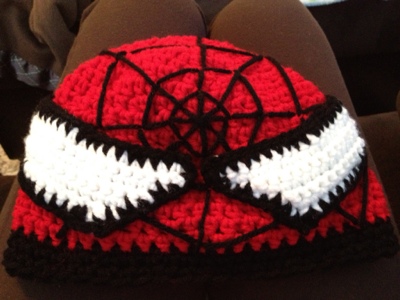 My tension deformed the hat so much it didn't even fit my three year old even though her heads incredibly large for her age. I somehow pulled so tightly on the yarn I shrank the hat. You could tell from the inside. It looked horrible. I'm big on presentation. I've learned sewing on crocheted items is much easier than knitted items. 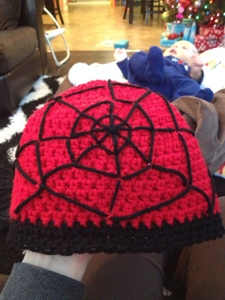 The last part, the eyes. I made the eyes three times before I was satisfied. The hard part again was sewing them to the hat. Most patterns have you sew the eyes on before the spider-web but as you can see I did not. I felt like it looked better with the web done first and was more realistic of a true web. Plus it was easier. I decided to make the eyes super large and wide rather than big and oval with the spiderweb in the background. It sort of gives it an angry rawr look. 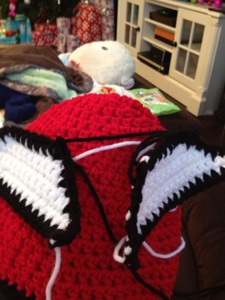